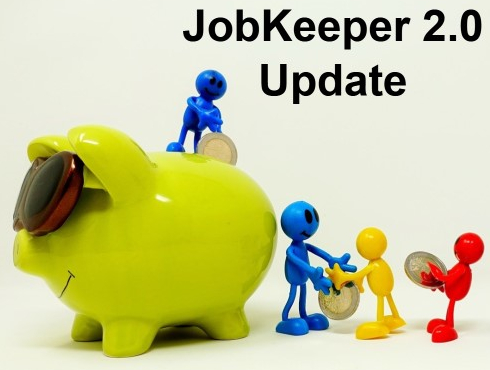 THE JobKeeper scheme has been a godsend to many small businesses and their employees endeavouring to cope with the COVID-19 pandemic over the last few months.

While initially scheduled to end in late September, the federal Government recently announced an extension of the scheme to 28th March 2021.

The Government has also announced several important changes to the scheme, highlighted below:

Introduction of Two-Tier System and Changes to Payments:

Effective from September 28 a two-tiered system will be introduced, and eligible employees will be regarded as being in either the “high tier” or “low tier”;

While the same JobKeeper criteria will continue to apply in terms of determining employee eligibility for JobKeeper, changes to business eligibility have been announced which will likely significantly reduce the number of businesses eligible for the scheme beyond September 28 (importantly, businesses currently eligible under the original criteria will remain eligible until at least the September 27).

This article provides general information only and should not be relied upon as formal or legal advice.

Refer to the ATO website for further details or seek the advice of your accountant. Of course, HR Success can also provide additional info/support as required.

Greg Mitchell is the Principal Consultant/Owner of HR Success, which has been supporting businesses and organisations in Western Sydney for over 13 years. Visit www.hrsuccess.com.au for further information or make contact via ph. 1300 783 211 or email greg@hrsuccess.com.au for assistance with managing your team.

– JWS Facebook page has over 46,500 fans.
– Value for money compared to more conventional forms of job advertising.
– Many businesses use only us when advertising available jobs.
– It is modern recruitment, giving the employer more control.